India PM Following PSLV-C23 Launch: We Must do More 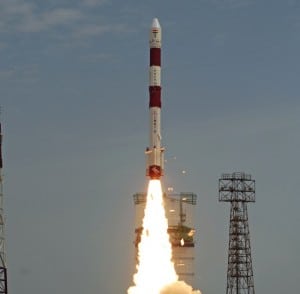 Airbus Defence and Space‘s Spot 7 Earth-observation satellite was the primary payload for the PSLV C23 mission. Onboard as secondary payloads were small-satellites AIsat, Can X4, Can X5 and Velox 1, of Germany, Canada and Singapore, respectively. According to Modi, 40 of the 67 satellites launched by the PSLV were foreign payloads. In a speech at India’s Mission Control Center following the launch, he called for ISRO to further expand its launch capabilities.

“India’s advanced space program, puts her in an elite global group of five to six countries today,” said Modi. “This is one domain in which we are at the international cutting edge … India has the potential to be the launch service provider of the world. We must work towards this goal. Construct the required new launch infrastructure. And extend our launching capabilities to heavier satellites.”

Modi praised the domestic nature of India’s space program, but also highlighted the desire to work more internationally. The Indian Regional Navigation Satellite System (IRNSS) is on its way to completion by 2015. The latest launch was of IRNSS 1B in April 2014, the second of seven satellites to complete the constellation. With this program underway and the Mars Orbiter Mission en route, Modi called for a new satellite and the expansion of India’s satellite navigation system to adjacent regions.

“Today, I ask our space community, to take up the challenge of developing a [South Asian Association for Regional Cooperation] (SAARC) Satellite — that we can dedicate to our neighborhood, as a gift from India. A satellite, that provides a full range of applications and services, to all our neighbors. I also ask you to enlarge the footprint of our satellite-based navigation system to cover all of South Asia,” he said.

Modi stressed that a desire to service humanity, not for power, underpins India’s space program. Disaster management and response has become a major function for India’s satellites. The country employed them while tracking Cyclone Phailin in 2013, providing warnings prior to landfall. Phailin was the strongest storm to hit India in 14 years. Modi called for India to maximize its use of space assets for governance and development to spur social change, economic development and resource conservation, and to share those benefits with other countries.

“We must therefore share the fruits of our technological advancement with those who do not enjoy the same, [with] the developing world, and our neighbors in particular. We already share disaster management data with over 30 countries. We provide benefits of tele-medicine to Afghanistan and African countries. But we must do more,” he said.

For Airbus, the addition of Spot 7 completes the company’s Earth imaging constellation. The new satellite joins Spot 6 and Pléiades 1A and 1B in orbit. The Spot satellites cover larger swaths at 1.5-meter resolution, while the Pléiades satellites are dedicated to more specific targets at 0.5-meter resolution. Spot 6 and 7 each have a design life of 10 years and will take the place of Spot 5, which began operations in 2002 and is scheduled for decommissioning in the first quarter of 2015.

Airbus is also in the mood for greater collaboration. The completed constellation paves the way for finalizing an agreement with Azerbaijan’s Azercosmos, which was signed in May. Azercosmos desires to jointly use Airbus satellites to improve its geo-information capabilities. Airbus said in a statement that the constellation’s completion opens up further opportunity for partnerships.