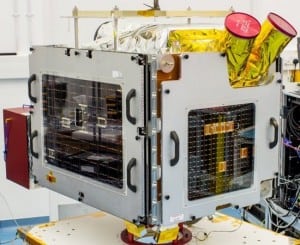 KazEOSat 2 prior to launch. Photo: SSTL

[Via Satellite 06-24-2014] Surrey Satellite Technology Limited’s (SSTL) medium resolution Earth observation satellite for the Republic of Kazakhstan, KazEOSat 2, was successfully launched into sun-synchronous orbit onboard a Kosmotras Dnepr rocket from the Russian launch pad in Yasny on Thursday, June 19, 2014 at 7:11 p.m. local time. The ground station in Kazakhstan’s capital of Astana made contact with the satellite on the first attempt following confirmation of separation from the Dnepr rocket.

KazEOSat 2 is based on the SSTL 150 platform and will deliver multi-spectral images for agricultural and resource monitoring, disaster management and land use mapping. The satellite is part of Kazakhstan’s civil space remote sensing system that also includes the KazEOSat 1 satellite.

A team of engineers from Kazakhstan will collaborate with a team of engineers from SSTL in the U.K. next month on the design and construction of the next mission, KazSTSat. In addition, a team from SSTL traveled to the operations center in Astana, Kazakhstan to perform in-orbit operations with the Kazakh engineers to commission the platform. Once complete, the two teams will commission and calibrate the imaging payload from SSTL’s mission control operations center in Guildford, England.