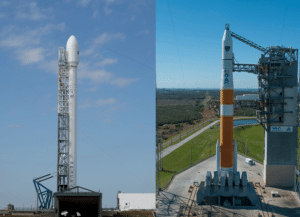 “Given that the Atlas 5 is dependent upon Russian-made engines — which can be cut off at any time — the logical thing to do is to eliminate the Atlas family, have the Delta and Falcon families, and that will provide the greatest amount of assured access, reliability and cost savings that the government is looking for,” said Musk.

SpaceX, having completed the requisite number of demonstration launches, is moving forward with its intention of openly competing with ULA for Air Force contracts. Currently, ULA has a block contract for 36 rockets over the course of five years. In addition to recent events, Under Secretary of Defense for Acquisition, Technology and Logistics Frank Kendall prompted the Air Force to introduce a “competitive procurement environment” for the EELV program back in 2012. Since then, the Air Force has not kept pace with the specific directions that followed from his memorandum.

“I’m not convinced yet that a wholesale change in EELV program is the answer when we’ve witnessed significant results from a minor modification of purchasing practice in existing programs,” said Sen. Richard Shelby, R-Ala.

From 2011 to 2014, the amount the Air Force budgeted for six satellite launches per year grew by 60 percent, yet reservations lingered from the last time the U.S. Department of Defense (DoD) attempted to facilitate competition in the launch industry. The U.S. Government Accountability Office also found that EELV costs under ULA have increased by 166 percent. With these numbers, both launch providers debated the future of the program.

The government’s key reservations were based in the history of the EELV program, where in the past commercial partners struggled to meet Air Force launch needs. ULA is subsidized by a $1 billion EELV launch capabilities (ELC) contract, which supports the joint Boeing–Lockheed Martin venture in addition to launch purchases.

“I don’t believe that the promised savings of eliminating competition have materialized,” said Sen, Dianne Feinstein, D-Calif. “The cost to the government really has skyrocketed.”

During the hearing, Musk told Congress that the contrast in price between SpaceX and ULA is great enough that the amount saved by the Air Force would in many cases “pay for the launch and the satellite combined.” In 2013, the Air Force paid $380 million per national security launch, whereas, according to Musk, SpaceX could provide the same launches for under $100 million each.

Congress also questioned the stability of ULA’s supply of RD-180 engines, which are jointly constructed with Russia. However, ULA claimed to have more than two years of engines stockpiled within the U.S. in case of an emergency.

“We have always kept our ability not to be leveraged in case of any kind of supply interruption,” said Gass.

SpaceX, which builds its rockets entirely in the U.S., disagreed on the safety of this strategy over the long term.

“They only have a two year supply of engines, yet this is a five year contract for the 36 cores,” said Musk. “So if there are any sanctions, or any issue with the supply of those engines, they will not be able to assure access to space through the Atlas 5.”

Both companies also debated the heritage of their rockets. ULA has completed 68 launches with its rockets, whereas SpaceX has only completed eight.

Scott Pace, director of George Washington University’s Space Policy Institute, mentioned that this comparison was not straightforward, as SpaceX technically tests multiple engines with every launch, and ULA has completed a much larger variety of missions. Each company claimed 100 percent success rates, as far as meeting mandatory mission requirements.

With the session completed, Congress will send additional questions in written format to SpaceX and ULA before making any decision.

“The most important consideration for any policy choice implementing approach is that it be clearly stated and adequately funded, with clear priority as to which requirements, schedules and goals will be relaxed if resources or regulatory relief are not forthcoming,” warned Pace. “To do otherwise is to invite failure.”