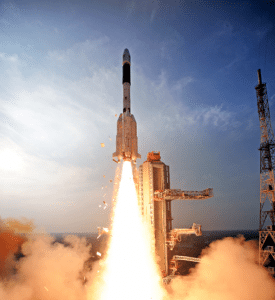 [Via Satellite 1-6-2014] The Indian Space Research Organization accomplished a milestone launch with its GSLV D5 launch vehicle on Jan. 05, 2014 from the Satish Dhawan Space Center SHAR, Sriharikota. The launch included the successful use of an indigenous cryogenic upper stage, making India the sixth space agency to successfully use the engine.

The communications satellite, GSAT 14, was placed in its intended geosynchronous transfer orbit (GTO). Immediately after orbital insertion, ISRO’s master control facility at Hassan took over the control and commanding of GSAT 14. The agency has planned orbit-raising operations on Jan. 6, 7 and 9, to place the satellite in geostationary orbit.