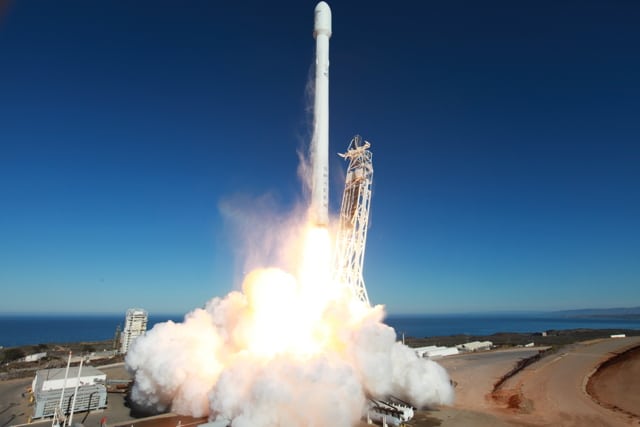 The upgraded Falcon 9 rocket lifted off from Vandenberg Air Force Base on a successful demonstration mission to deliver the CASSIOPE satellite to orbit.
Photo: SpaceX

[Via Satellite 10-02-2013] On September 29, SpaceX’s upgraded Falcon 9 rocket launched from Vandenberg Air Force Base on a successful demonstration mission to deliver the CASSIOPE satellite to orbit for MacDonald, Dettwiler and Associates (MDA) of Canada. The launch marked the 11th flight of a Falcon rocket, the sixth Falcon 9 launch, and the initial flight of the v1.1 configuration.

“It was a great day, and we accomplished all our objectives successfully,” Elon Musk, founder of SpaceX, said during a recent press call.

“It was an amazing flight,” added John Insprucker, SpaceX’s Falcon 9 product manager, in a launch webcast. “There’s tons of data coming back and it looks like it was a picture-perfect flight. Everything was looking good right down the middle of the track.”

While similar to the original Falcon 9, the Falcon 9 v1.1 has engines that are 60 percent more powerful, according to SpaceX. It also features other upgrades such as longer fuel tanks, and the arrangement of the engines to continue regular function despite the failure of another. The launch was the first Falcon 9 mission to use a payload fairing, considering all previous missions have carried Dragon spacecraft, which do not need encapsulation. The upgraded Falcon 9 design was also planned with reusability in mind, presenting the ability to restart the engines of its two stages.

“The most revolutionary thing about the new Falcon 9 is the potential ability to recover the boost phase, which is almost three-quarters of the cost of the rocket,” Musk said. The test for this feature did not bear expected results, but allowed the company to gather necessary data for further improvements. “[The] rocket booster relit twice (supersonic retro and landing), but spun up due to aero torque, so fuel centrifuged and we flamed out,” he added. “Between this flight and Grasshopper tests, I think we now have all the pieces of the puzzle to bring the rocket back home.”

In addition to carrying CASSIOPE, a multifunctional mission designed to serve both a scientific and a demonstration of technology purpose, the Falcon 9 hosted several other payloads including the Polar Orbiting Passive Atmospheric Calibration Spheres (POPACS), a privately funded CubeSat mission by collaboration between Utah State University, Planetary Systems Corporation and Drexel University; The Drag and Atmospheric Neutral Density Explorer (DANDE), a 50 kg spherical spacecraft developed by students at the University of Colorado at Boulder; and CUSat, a technology demonstrator developed by Cornell University.

With the success of Sunday’s test, SpaceX will begin to focus on its upcoming launches. Sunday’s launch was SpaceX’s second this year and the company hopes to conduct two more launches before the end of 2013. The first launch, the SES 8 satellite, is expected to take place later this month. However, SES will wait for a detailed briefing from SpaceX regarding Falcon 9 v1.1’s failure to perform the planned reignition of its upper stage, which is crucial for the deployment of SES 8, according to Yves Feltes, VP corporate communications, SES. The second launch carrying Thaicom 6 is scheduled for late November or December. After these, the next Falcon 9 launch from Vandenberg is scheduled for late next year with Argentina’s SAOCOM 1A satellite.