India is seen as one of the fastest-growing satellite DTH markets in the world. At the beginning of this revolution, Via Satellite spoke with media tycoon Subhash Chandra about his vision for the satellite television market in the country — from investment and finance, to piracy and competition. This article was originally published in June 2004.

There is little doubt India has the potential to be a huge market for satellite services — a major growth opportunity for numerous operators looking to boost their positions in the Asia-Pacific region. The country is set to see explosive growth in a number of key economic areas, and satellites will play a major role, particularly in the developing television and Internet markets.

India is particularly attractive because it has a population of more than 1 billion people, and its huge television market is ripe for expansion. For example, some U.K.-based analysts project the country could have more than 200 million television sets by 2008.

One of the companies trying to tap into the growing demand for television services is Zee Telefilms, which claims to be India’s largest, fully integrated media and entertainment company. Zee features media brands that range from Zee TV to Zee News. It also is the largest producer and aggregator of Hindi programming in the world, with an extensive library housing television and news content, and movie titles. Zee also is India’s largest cable distributor through its wholly owned subsidiary Siticable.

While the company is involved in all aspects of the Indian television market, one of its key challenges during the next few years will be to generate growth in the satellite pay-TV sector, in which it already has begun to operate. Significantly, it was awarded the first Direct-to-Home (DTH) license in India. Zee Networks hopes to gain two million subscribers for its Dish TV platform by the end of June 2005.

The country could generate between 10 million and 15 million pay-TV satellite subscribers during the next five years. Its main competition will come from rival DTH platform Space TV, which is backed by Star TV, among others. Space TV is likely to launch at the end of 2004.

In a major exclusive, Via Satellite obtained a rare interview with one of India’s most influential media industry figures: Zee Telefilms Chairman and Managing Director Subhash Chandra. He talked to Via Satellite Editor Mark Holmes about the prospects for DTH in India. Chandra also addressed the potential for satellite to make a huge impact in the Indian television market.

Via Satellite: How are you looking to attack the cable and satellite-TV markets in India? 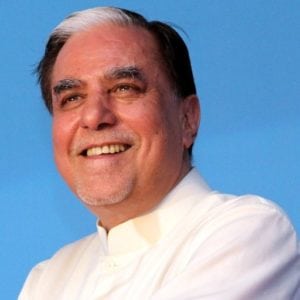 Chandra: Subscribers to cable do have a number of problems in terms of the quality of service, poor infrastructure and lack of consumer care. Today, cable homes are not getting any more than 70 ‘watch-able’ channels, and we are going to give them a proposition of channels known as ‘Cable+.’ There are about 15 channels exclusive to our service. [Subscribers] will get the same channels they are getting on cable as well as between 15 and 20 exclusive services. The positioning is that Dish TV is a high-end market solution. The picture quality will also be better.

As a cable MSO, we are serving six million homes out of 45 million homes [but] we get paid for only about a million. In terms of satellite service, we started that about three months ago. We’ve done a soft launch without spending any advertising money, and we have acquired about 140,000 subscribers. By the end of May, we had around 96 channels on the platform. In June, there will be the hard launch of this service and, by June 2005, we have targets to get two million DTH subscribers.

Via Satellite: How much are you going to invest in new programming and channels? What is the importance of local content in the Indian market?

Chandra: In terms of the entire infrastructure, hardware, software, we are spending a total of $100 million. We are not buying programming and mounting a channel on our own, so we have agreements with the channel owners on a revenue-share arrangement. Programming costs will be about 25 percent of subscription revenues. Local content accounts for around 90 percent of what is delivered into homes, and the foreign-language or English-language content accounts for around 7 percent to 10 percent of the market.

Via Satellite: How are you looking to sell and market pay-TV services in India? How influenced are you by successful pay-TV operators in the United States and Europe?

Chandra: I am impressed more with the U.S. pay-TV markets than the European markets. In the United States and Canada, there were already cable markets but satellite has come in and has had impressive growth. The cable companies in the market were not responsive enough in terms of digitizing themselves in time. The situation exists in this country where the cable operators are analog and, in even in the big cities, they cannot give anymore than 70 or 75 channels in a viewable form. They will also go digital, and I think cable, broadband and DTH will exist in this market. In around seven years time, I see this market going to between 70 million and 75 million paid homes.

Via Satellite: At the recent DTH Summit in Paris, we heard some impressive statistics in terms of BSkyB’s Personal Video Recorder (PVR) strategy. When do you expect Zee Networks to start offering PVR services?

Chandra: I am still on the drawing board in terms of the PVR system, which we will deploy. I don’t see PVR services coming in the next 12 months, but certainly, after around 18 months, it will definitely start to come in. The model will be different than the one that BSkyB deploys in the U.K. We don’t see PVR as a major growth opportunity for at least two or three years. People have to start getting used to the digital service, and things like PPV and PVR will come after that.

Via Satellite: Is piracy likely to become an issue in India?

Chandra: There is not much of a market for pirates to attack. The cable operators themselves are, in a way, pirating the signals and paying for far less than the number of homes they are servicing. We have adopted the Conax CA system, which is very small. We don’t expect to have problems in this area for at least two or three years.

Via Satellite: What are the major financial challenges facing the company?

Chandra: We don’t really have many financial challenges. However, the challenge will be if someone wants to acquire subscribers and subsidize the boxes. The pay-TV market is growing an average of between 12 percent and 15 percent a year; this is both cable and satellite.

Via Satellite: What levels of growth are you forecasting?

Chandra: Growth in the satellite pay-TV market is going to be phenomenal in the next four or five years. In that timeframe, we should have at least 10 million or 15 million satellite pay-TV subscribers.

Via Satellite: How are you looking to boost Average Revenue Per User (ARPU)? What do you see as the main revenue generators in the next six months?

Chandra: The ARPU in the next two years will hover around the $7-to-$10 range per home. Around $5 will account for the basic package service, and an additional $5 will come from the programming and a la carte tiered services as well as value-added services. In terms of interactive services, we are working with some European technology providers that are able to give a small return path for about $30 a home. That should allow us to do more interactivity without using the phone line.

We are looking at such services as polls and information services. We have to look at the interactive programming where there are stories that have different endings, for example. They will happen on the same timeline as PVR of around 12 to 18 months.

Via Satellite: What are your capital-expenditure plans for the rest of the year, and when do you foresee a profit?

Chandra: We have already invested $50 million, and another $50 million will be invested in the next 12 months. We should be breaking even in around six or eight months. We want to expand the broadcast operations to between 150 and 200 channels.

Via Satellite: Finally, how do you see the digital television landscape changing in India?

Chandra: In the next two years, digital homes, both on cable and satellite, will reach between five million and six million. In five- to seven-years time, I think cable will be digital, and the market will be fully digitized. Some of the Indian programmers are still not fully aware of the opportunities yet.