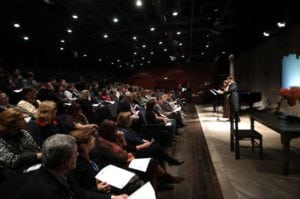 [Via Satellite 07-14-2016] Hispasat is broadcasting Vincenzo Bellini’s opera “I Puritani” live from the stage of the Teatro Real in high definition to audiences in Europe and Latin America. The satellite broadcast has been made possible through an agreement reached in November between the Spanish operator and the Teatro Real. Under this agreement, Hispasat has committed to providing space capacity to the live satellite broadcast of several performances at Madrid’s opera house.

This initiative, included as part of the Teatro Real’s activities to celebrate its 200th anniversary, and within the programming of Opera Week, will continue with the broadcast of Giuseppe Verdi’s “Othello” on September 24. With Hispasat, the Teatro Real will be able to reach the public and offer some of its productions to audiences in different locations around Spain and around the world.

I Puritani is the final production of the Teatro Real’s current season. Musical director Evelino Pido and stage director Emilio Sagi are leading the production team with the support opera singers, such as Javier Camarena, Diana Damrau, Annalisa Stroppa and Ludovic Tezier, and the Teatro Real’s official chorus and orchestra.