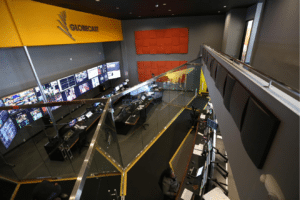 [Via Satellite 07-06-2016] Globecast, a major broadcast and media company, is making media management a much larger portion of its business and anticipates that satellite, while still important, will have shorter capacity contracts in the future. Though satellite remains the company’s primary business, Jonathan Morley, Chief Technology Officer (CTO) of Globecast, told Via Satellite that media management is where he anticipates more substantial growth.

“What we are moving toward is having clients be able to give us files of their content once, and then we can prepare that in a number of different iterations for Video-on-Demand (VOD), Over-the-Top (OTT), etc., tailored to markets around the world all in one process. That’s as opposed to them having to give us content for linear and then having to go somewhere else for VOD or OTT. We are trying to capitalize on doing everything in a one-stop-shop situation,” said Morley.
Globecast today has media centers in Singapore, London and Los Angeles, handling media management, playout, and other services for broadcasters using satellite or terrestrial distribution. The company started doing linear playout around 2007 with small channels in Europe and has grown this part of its business from there. What began as developing in-house solutions based on specific customer needs eventually accumulated into a lucrative skillset for the company. Morley described media management as a constantly evolving field with significant potential for more growth.

“The market becomes more sophisticated with clients asking for advertising metrics associated with their channels. We are partnering with other companies to see if they can provide that information for us to give back to them. One thing leads to another,” he said.

This move toward partnerships, in turn, means creating a company landscape that is adaptable to different customer needs. For example, Morley said customers can often get better market analytics with OTT and VOD than they can necessarily with satellite. Furthermore, it can be difficult to “rewrap” linear content with different metadata for VOD and other markets.

“It doesn’t mean we are turning our back on satellite,” explained Morley. “It is still important for us, and it’s anyone’s guess how much longevity satellite has. I am relatively optimistic. I still think it’s a good way to deliver a large amount of channels, especially to those that are remote. It still costs about $400 more to get to a house, say in a rural area, than it does by satellite because you have to install cable or fiber to that location. For now, it’s still cheaper to address those parts of the market via satellite.”

An example of this is Globecast’s recent contract win with French broadcasting group France Televisions. The contract allows for the transmission of cycling events including the Tour de France using satellite and cellular service. However, Globecast’s need for satellite is changing, and Morley said contracts of shorter duration than the typical 10 to 15 year leases operators commonly push would be preferred going forward.
“I think we are definitely going to shorter contracts in taking leases on satellite operator’s space. There are some deals now where you can do pay-as-you go, so you don’t necessarily have to pay for an entire transponder, you can agree with a satellite operator to set it up incrementally,” Morley said, adding that satellite operators appear more willing to share risk with the company than make the burden of filling up transponders solely their customer’s concern. “Those are quite useful for us. In the past it’s always been up to us to buy a transponder and fill that with clients. The terms aren’t quite as difficult now as they have been in the past.”
Morley noted that media management is becoming a more competitive market. SES recently made a major move into this space through its acquisition of Israel-based RR Media, merging the company with its subsidiary SES Platform Services in Germany. Morley said it is a visible trend, particularly at trade shows, that more companies are trying to accomplish to provide a number of broadcast services rather than specialize in one skillset or technology.

Along with the focus on media management, Globecast is also shifting its core network from Synchronous Digital Hierarchy (SDH) to Internet Protocol (IP). Morley said IP makes bandwidth more scalable, providing efficiency savings whether dealing with satellite, cable or fiber. Globecast began this transition roughly 18 months ago and he estimated it would be another 12 to 18 months before the transition is complete.