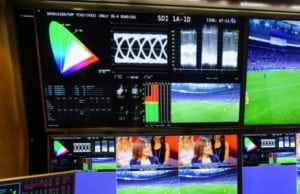 [Via Satellite 07-05-2016] Eutelsat and Italy’s national public broadcaster Rai are broadcasting seven of the Euro2016 soccer games in Ultra-HD. Together the companies delivered the first quarter final game, filmed using 14 Ultra-HD cameras UEFA placed at the Velodrome Stadium in Marseilles, France, to viewers in Europe.

Camera crews sent the footage to the International Broadcasting Center (IBC) in Paris, France where they were forwarded to Eutelsat’s Paris-Rambouillet teleport. A temporary studio set up by Rai at the teleport added live commentary, after which the special Rai 4K channel was encrypted and uplinked to Eutelsat’s Hotbird satellites. The special broadcasts also involve the support of technology partners, including DBW Communication and V-Nova.

Subscribers to the Tivùsat satellite platform with the necessary Ultra-HD equipment were able to see the four quarter-final games in Ultra-HD, and will be able to view the upcoming semi-finals on July 6 and 7, followed by the final match on July 10. These live broadcasts of European Championship matches constitute Italy’s biggest Ultra-HD live sports broadcast to date and prefigure the launch of regular channels.