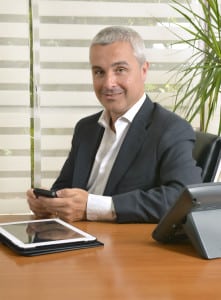 [Via Satellite 12-21-2015] TCC, a leading pay-TV services provider in Uruguay, is evolving its approach to the market as trends in video continue to transform. The company, which started as a content distributor solely through cable, made the decision not to be tied to any specific method of distribution. Today, TCC offers content through cable, satellite, Internet Protocol Television (IPTV) and Over-The-Top (OTT) platforms, and has plans to expand geographically. Javier Ruete, CEO of TCC, told Via Satellite that the market for pay-TV in Latin America remains robust and that satellite is playing an important role.

“In the last five or 10 years the pay-TV market has grown mainly due to the fact that lower income households have been improving their income in the last decade,” he said. “That has expanded the market. In that context, [Direct-to-Home] DTH operations have been very keen on acquiring that new market against cable, which has usually been focused on urban areas and middle- to high-income households. In this new market, DTH operations have been the ones that have gotten much of that growth. Satellite operations didn’t harm cable or fixed line networks, but have acquired much of the growth of the new market.”

TCC’s strategy with satellite is to focus predominantly on the market within Uruguay. As the company transformed and diversified in the late 2000s, Ruete said it started developing head-end in the sky solutions, which aggregate channels for remote headends for small and medium sized networks around the region. This was important, he said, because Montevideo, where TCC is based, has six pay-TV companies vying for customers in a city with a population of 1.5 million people. Outside of Uruguay, Ruete said licensing challenges specific to each country bog down expanding by satellite.

In Uruguay, Ruete said TCC is partnering with a DTH wholesale operation in order to merge with them, exclusively to focus on technology and DTH in the country. Regionally, TCC helps deliver content to more than 100 networks in Uruguay, Chile and Argentina. Ruete said the company plans to widen its reach to include Bolivia, Brazil, Colombia and Mexico. For these new markets, Ruete said TCC is taking a different approach that does not include satellite in order to sidestep these difficulties.

“What we have been doing for the last three years was to transform that carrier business into a technology business. All the headend solutions, the OTT solutions, and all the STB solutions that are embedded into the same ecosystem are our own software. We have been selling software as a service and making small and medium sized networks throughout the region to have the capabilities of TCC in Montevideo, but in their own country without TCC getting involved with their business,” he said.

Looking to the future, Ruete said smaller players in the Latin American pay-TV market are challenged when it comes to obtaining rights for content due to their size. He said the market should adopt a “strength in numbers” approach, and that TCC is keen to help companies that are otherwise not prepared to compete for content in its domestic market.

“In Uruguay there is a need for networks to consolidate,” he explained. “The market has big players like Claro, Telefonica and DirecTV that have their own purchasing power. On the other side of the balance you have content dealers like HBO, FOX and the studios from Hollywood. They have been consolidating into very big groups. What we find is that all independent networks throughout Latin America need to get together in order to balance that negotiation power for purchase.”

TCC is also watching and adapting to trends in viewing behavior. This year the company built a new OTT platform called TCC Vivo, which Ruete said many customers use for more than an hour at a time. He said TCC was also the first company to deliver an HD channel to Uruguay in 2006, and now distributes a majority of the 60 to 70 channels available in the country. Regarding 4K, Ruete said Latin American adoption will likely progress slower than outsiders expect, especially with linear content. OTT could propel 4K faster, he said, but might face resistance from telcos and network operators who need to ensure that such bandwidth-heavy video draws adequate revenue to compensate for its resource-intensity.

Ruete said Uruguay’s economy slowed down in 2015 after a prolonged period of “China-like” growth rates around 7 to 8 percent. He expects the country’s economy to grow at 2.5 or 3 percent in 2016, which constitutes a major change for the nation, having acclimated to a high rate of growth. These factors are influencing what TCC invests in today.

“Our main focus now is on customer experience, recommendation engines, discovery of content and building better User Interfaces (UIs) for customers to have a convenient and intuitive way to consume content. That is our main focus right now,” said Ruete.