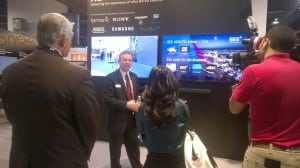 [Via Satellite 04-13-2015] SES is planning its Ultra-HD foray in the United States with the start of its first 24/7 pilot channel in the coming months. The channel would be based on technology the company is demonstrating through live and linear Ultra-HD broadcasts to a cable system at the 2015 NAB Conference and Exhibition currently taking place in Las Vegas, Nev.

“This summer we expect to have a channel up and operating, at least one channel, and piloting that through a number of Tier 2, 3 and 4 cable operators to provide some experience on having this deployed in an actual operating network,” Steve Corda, VP of business development for SES in North America, told Via Satellite.

In addition to its teleport network, SES is conducting the transmission from Las Vegas on its AMC 1 satellite, with the live feed uplinked to the SES 1 satellite by a Satellite Newsgathering (SNG) truck from Pacsat.

According to Corda, SES’ NAB demonstration is the first displaying of live and scheduled 4K Ultra-HD transmissions showing how this high-quality video format can be sent from satellite, through a cable system, to a cable TV household. This approach is where SES sees its greatest opportunity to broadcast 4K in the United States, which will differ significantly from the company’s approach in Europe.

“In Europe we have had a number of demonstration channels up over the years starting with MPEG 4 and then HEVC,” said Corda. “Now we have three demo channels up operating and a number of sub-channels as well in different markets. We see in Europe 4K is a fairly big opportunity largely because we have a big Direct-to-Home (DTH) infrastructure. So when we looked at the opportunity here in America, given that SES is not in the DTH industry for the most part but more in the cable TV infrastructure, that’s what brought us to developing this approach.”

Corda said SES is working closely with a prominent Tier 2 cable operator — one with less than a million subscribers — to launch the pilot program this June. The company is focusing on smaller cable operators because most of the larger players have direct fiber running to programming sources. This, Corda said, is how big cable operators will likely execute their 4K strategies. For cable operators working with SES, the only infrastructure required is an IP Integrated Receiver-Decoder (IRD). End-to-end, the broadcast takes roughly 10 to 12 seconds.

“Its a high performance linear 4K Ultra-HD Content Delivery Network (CDN) that is really focused on 4K; it’s focused on linear and it takes advantage of all the performance virtues that you have with satellite, starting with one signal that can be transmitted to every cable head-end in the U.S. Once it’s in the head-end, the signal would go to millions of cable TV subscribers. Broadcast over satellite, multicast down through the cable network; it is different from digital TV in that it is all IP,” Corda explained.

He added that broadcasting from satellite to cable is essentially straightforward, and that the broadband infrastructure available today can handle this approach. Using MPEG 4 or MPEG 2 would require too much bandwidth for 4K Ultra-HD to work with a cable network, especially given that many cable networks continue to use MPEG 2 today. An IP system is best able to handle HEVC enabled 25 Mbps streams for 4K Ultra-HD, Corda said. Furthermore, leveraging IP gives greater flexibility and a means to take advantage developments in consumer electronics.

He estimated the number of cable households in the U.S. to be approximately 50 to 60 million, making a large addressable market for SES. And by using a cable modem, the service does not require a Set-Top-Box (STB). Corda said content for SES’ 4K Ultra-HD channel is still in the early stages, but the company plans to run a mix of television shows, movies and sports.

“Because of the amount of content available, lots of it would be retransmitted at different times of the day, but what we are planning on doing is getting a robust enough content line-up that provides enough to not only test out the system technically, but also get viewers a full 4K Ultra-HD experience,” he said.