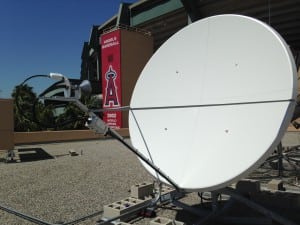 [Via Satellite 02-03-2015] Ka You Systems, a satellite services company headquartered in Maryland, has installed a satellite uplink and downlink for KLAA-AM, a 24/7 sports station that broadcasts from the baseball stadium in Anaheim, Calif. Having outgrown its existing terrestrial transmission system, the KLAA technical team worked with Ka You Systems to design a primary link between the studio and its transmitter site.

“KLAA went from using a T1 phone line to the latest in [Digital Video Broadcasting]  DVB satellite encoding,” explains Ka You president Linda Gimourginas. “Unlike terrestrial solutions, satellite has no points of failure outside of your control. You control the signal from the production facility and uplink to the downlink and receiver.”

The Ka You team also used a Non-Penetrating Roof Mount (NPRM) to secure the dish against Santa Ana’s strong winds. The team engineered the project to withstand winds up to 125-mph.