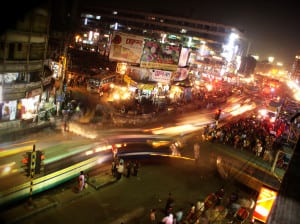 Dhaka, the capital city of Bangladesh, one of the top new markets for satellite pay-TV according to Euroconsult. Photo: Adam Cohn

[Via Satellite 12-04-2014] New research by Euroconsult pegs emerging markets as the source of the majority of satellite pay-TV growth. According to the research and consulting firm’s “Satellite Pay-TV: Key Economics & Prospects” report, 60 percent of global subscribers are now found in emerging markets, accounting for almost 100 percent of subscription growth.

“Emerging markets are home to over 80 percent of the nearly 160 active platforms,” said Dimitri Buchs, consultant at Euroconsult and editor of the report. “Over 95 percent of platforms launched in the past three years operate in these markets.”

Euroconsult expects many of the largest mature markets such as the United States, France and Japan to see a contraction in satellite subscribers, revenues and number of TV channels broadcast. Some emerging markets have seen an oversupply of platforms, such as Indonesia, according to Euroconsult. Several large, fast-growing satellite pay-TV markets such as Russia and Brazil started to see an increase in Merger and Acquisition (M&A) activity in 2014 as growth slowed compared to the past several years.

Euroconsult expects Asia and Sub-Saharan Africa to be the fastest-growing regions for satellite pay-TV. The company also anticipates an increase in cross-media platforms in mature and advance emerging markets. This includes supporting parallel TV Everywhere and Over-The-Top (OTT) services in order to preserve customer bases in established regional markets. Euroconsult predicts by 2023 there will be nearly 30,000 channels distributed globally by satellite.