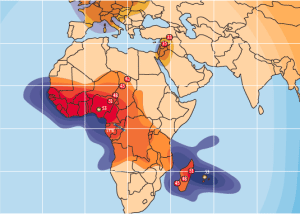 [Via Satellite 09-12-2014] Senegal-based Excaf Telecom has signed a multi-year agreement with Spacecom for Ku-band capacity on the Amos 5 satellite. The company has plans to build a nation-wide digital terrestrial television network using the capacity. Excaf said it will broadcast the original signal will from Senegal’s capital, Dakar, where the company will spearhead the digitization of broadcasts for the country.

Located at 17 degrees east, Amos 5 supports broadcasting and telecommunications services with three Ku-band beams and a pan-African C-band beam. Spacecom recently won another contract for capacity on Amos 6, slated to launch aboard a SpaceX Falcon 9 rocket in 2015.