During the two weeks of sporting events, more than 11,000 media representatives and 90 broadcasters from 123 countries are covering the 98 Olympic events this year.

“With a global viewing audience of 3 billion, the Olympic Winter Games showcase the extraordinary impact that satellites have on the world,” said Patricia Cooper, president of the Satellite Industry Association (SIA). “Satellites are ensuring that fans in every corner of the planet can cheer on their country’s finest winter athletes and follow the excitement and sportsmanship of the winter games.”

Satellite has been present in the Olympic Games since 1964, when NASA’s first geostationary satellite, the Syncom 3, broadcast the Summer Olympics in Tokyo. This year, SES, Intelsat, Eutelsat and Telesat are the four commercial satellite operators providing satellite connectivity to broadcasters and news organizations for the event. Together, these four companies operate more than 150 geostationary satellites.

NBC Olympics, the U.S. rights holder for Olympic programming, is relying on SES satellite capacity during the 1,500 hours of live coverage at the games. The broadcaster is using Ku-band capacity from the NSS 7 satellite to distribute HD Olympic coverage from the venue and roaming NBC News satellite newsgathering (SNG) vehicles to the International Broadcasting Center (IBC) in Sochi. Viewers in the United States can watch the coverage via direct-to-home (DTH) satellite TV companies, or via cable TV services that receive the coverage from satellite feeds delivered through terrestrial cable head-end facilities. Coverage is also available via the over-the-air (OTA) signal that can be received with a digital antenna. 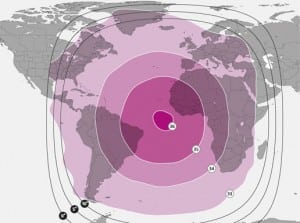 “SES has a total of 55 satellites covering the globe. We have a flexible fleet that allows us to move capacity from one region to another if needed,” said Samantha McCloskey, VP of the Global Occasional Use (OU) business team at SES. “We also have the ability to provide backup capacity to ensure flawless service for the customer. We make the satellite capacity available early for our customers so they can test the transmissions and feel comfortable with the satellite and the coverage they will receive.”

SES has been involved in coverage of the 2012 Summer Olympics in London, as well as the games in Beijing and Vancouver. This year, the company is gearing up to provide coverage for two other large sporting events: the FIFA World Cup in Brazil and the Commonwealth Games this summer in Glasgow, Scotland.

“Sport programming is a big driver behind SES’ OU business, as is global coverage of breaking news,” said McCloskey, who also mentioned Formula One racing and the Super Bowl as big events for the company.

Many members of the SIA participate in large, global events like the Olympics. These ad-hoc events, as point-to-point contributions, are not necessarily a big driver of satellite capacity, but as high-profile, high-value events that are transmitted to regions across the globe, they are important for the industry. Even though the games are broadcast around-the-clock for two weeks, the revenue that comes in from this event doesn’t compare to revenue brought in by broadcasting a channel such as HBO around the world.

Satellite capacity is also used for more than broadcasting the Olympic events. Satellites are providing additional coordination, logistics and security support for the games. Security personnel and emergency first responders, as well as some of the team coaches in Sochi, use satellite phones for enhanced safety in the city. These phones provide coverage regardless of whether or not the user is in a wireless network.

Companies such as Iridium and Inmarsat provide satphones and satellite data terminals for telephone and broadband connectivity on site. And DigitalGlobe is providing high-resolution images to enhance security, forecast weather conditions and track the environmental impact before, during and after the games.

SIA said the active participation of these satellite industry players in the 2014 Winter Olympic Games takes a “gold medal” for satellite coverage.