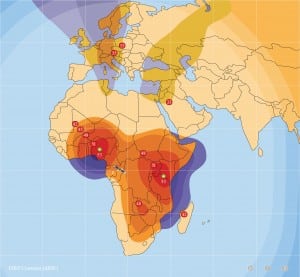 [Via Satellite 10-22-13] Spacecom’s Amos 5 at 17 degrees east has won another broadcast deal in East Africa. Under the new $3.6-million contract, Spacecom will provide analog to digital migration broadcast services to an East African Digital Terrestrial Transmission (DTT) and Direct To Home (DTH) operator.

The operator’s DTT distribution and DTH signal to the region, composed of dozens of channels focusing on local and international content including news, sports, entertainment and family programming, will be transmitted on Amos 5’s Ku-band (Ku-3).

Earlier this month, Spacecom announced an East African digital migration broadcast project worth $5.9 million. “These two wins prove that the satellite’s position, signal strength and resources meet the needs of our East African customers. We are proud to be a part of the region’s move to digital broadcasting. This deal is another milestone for Amos 5 at 17 degrees east as it becomes a major player in the East African broadcast market,” said Eyal Copitt, senior vice president of sales for Africa, Asia and marketing at Spacecom.

Amos 5 was designed and built specifically for the African market with a pan-African C-band beam and three Ku-bands that cover the continent and provide connectivity to Europe and the Middle East.