Mega Events in Brazil: What it Means for the Satellite Industry

Fortune has certainly smiled on Brazil in recent times. It is hard enough to win the bidding for one major sporting event, so to hold both the FIFA World Cup and the Olympic Games in the space of three years is a huge boost, not only for Brazil, but also for region.

“TV Globo will not to be responsible for the International broadcast feed of the FIFA World Cup 2014 and the Olympics in 2016, but these are not going to be a regular events for us. Usually we cover only the Brazilian team in a World Cup in another country and we get from FIFA or somebody else the feed about the others teams. However, this time we will cover the event in 12 cities and all the 32 teams,” he says.

According to Bittencourt, World Cup year is traditionally the time when people buy new TV sets and one of the key barometers of success for the company will be to get households in Brazil watching the event on TV Globo in HD.

Oscar Lopez, CEO, Overon America, admits the media solutions company also is ramping up its presence ahead of the World Cup. “In Brazil, we are going to have a big operation for the World Cup. We are going to deploy SNGs to cover the whole event. Everybody wants to be in Brazil but the fact is, it is a complicated country with a lot of entry barriers. But, we are going to be there, at least for the big events that are coming,” he says.

Niclas Ericson, FIFA TV director, admits the World Cup can often act as a platform for new technologies. In 2010, this was definitely the case. “For the 2010 3-D TV project we had nine networks taking the 3-D TV feed with distribution across the world, 650 cinemas taking the final match, and an official film project with Sony. That was also done in a very short time period. It was though quite a costly project but the rewards were worth it. In 2014, there are already manufacturers that have the capacity to produce football matches in Ultra-HD (UHDTV), and then it comes back to economics,” he says.

In 2010, FIFA TV worked directly with the satellite industry in terms of world feed distribution. It also had interaction with companies like Eutelsat and other providers for its cinema 3-D distribution that it had in 2010. There are other issues also. “We are also very sensitive to satellite ‘overspill’ (i.e. unencrypted transmissions which spills over to several territories). We get involved in the action monitoring of each broadcast. We have to make sure everything gets to the consumer in a smooth and secure way. We get in touch directly with the broadcasters and satellite operators regarding this aspect of a FIFA World Cup,” says Ericson. 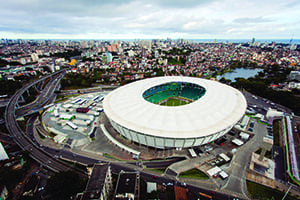 Satellite Bandwidth
Latin America is already a vibrant region for the satellite industry. It has attracted a number of operators looking to sell capacity as countries look to reduce the digital divide and bring more video offerings to customers. The FIFA World Cup next year and the Olympic Games in 2016 will undoubtedly see an upsurge in demands for satellite bandwidth.

These events will be highly significant for Star One, Brazil’s major satellite operator, and its parent company Embratel, one of the country’s main telcos. Embratel, was elected the Telecommunication sponsor for the 2016 Olympic Games that will take place in Rio de Janeiro in 2016. “This of course will bring significant opportunities for Star One in terms of satellite capacity. Both events bring us an extraordinary opportunity to sell our capacity,” says Gustavo Silbert, CEO, Star One.

Carmen González-Sanfeliu, Intelsat’s regional vice president, Latin America & Caribbean, admits the World Cup and the Olympics in three year’s time will see an upsurge in bandwidth demand, as more than 100 million viewers in Latin America are expected to watch both of these events, as well as attract a global audience of more than three billion people, a quite staggering number. González-Sanfeliu says Intelsat will dedicate ample satellite capacity across multiple satellites to cover the events.

“For the 2010 World Cup in South Africa, we dedicated more than 900MHz of satellite capacity across nine satellites within our global fleet. For the 2012 London Olympics, we used 500 MHz of bandwidth across 11 satellites that supported approximately 50 channels with 15,000 to 20,000 hours of coverage. With global interest for the 2014 World Cup expected to be high, we expect to provide similar amounts of capacity,” she says.

Dolores Martos, VP, Latin America & Caribbean sales, SES, also thinks satellite will play a significant role in these sporting events, particularly as telcos seek extra capacity as people look to access content on the move. “The telcos and the broadcasters face infrastructure challenges to get the content to the audiences. In Brazil, satellite will play an important role. If you look at the mobile phone companies, they have gradually been leasing more capacity to reach remote areas and provide additional offerings. All of them are getting ready for this big event. Mobile networks will face the challenge of having a substantial peak in the demand. The government has a very ambitious connectivity goal. I think video and broadband that will take place in these events will go hand in hand in terms of demands for satellite capacity,” she says.

Ignacio Sanchis, Hispasat’s chief commercial officer, says these sporting events will contribute to accelerated growth in terms of satellite capacity demand over the next three years. Sanchis expects to see an important increase in the demand for video services, and in particular for occasional use services, which he thinks could easily double during this period.

Ultra-HD
One of the major changes in broadcasting, even since London 2012, has been the surge towards UHDTV, which offers an improvement in picture quality and, naturally, requires more bandwidth for transmission. While it will make an appearance at the World Cup next year, it seems the big impact could come at the Olympics two years later.

Bittencourt admits that UHDTV will be one of the new technologies coming up to cover these events over the next three years. TV Globo was fortunate enough this year to have a dress rehearsal for the World Cup by covering the Confederations Cup, another major international sporting event. Intriguingly, UHDTV came into the mix here. “We are looking very carefully all the 4K applications which improve the HD operation. At the FIFA Confederation Cup we experienced the use of stitching two 4K cameras to create some replays which were impossible to implemented with HD regular cameras. We don’t have any plan to shoot in 4K for 4K distribution yet, but we are following all the opportunities that might come for this technology,” says Bittencourt.

To put this into context, TV Globo is still in the final part of its transition from SD to HD, and this process has taken time. “We have done the transition [SD to HD] since 2007, in a very smooth way. Every new system replacing an old or obsolete one was done in HD. Every new facility has HD capability,” adds Bittencourt.

Intelsat itself has teamed up with Ericsson to demonstrate an UHDTV broadcast in North America, something González-Sanfeliu calls “a major milestone;” however she expects UHDTV to have a greater impact at the 2016 Olympics rather than the World Cup next year. “We are unsure what the impact of UHDTV will be due to the development time, and the impact of 3-D looks to be diminishing, as evident by announcements by broadcasters such as ESPN that it is shutting down its 3-D channel,” she adds.

Sanchis is also cautious as to the type of impact that UHDTV could have at these events. Hispasat has performed several demonstrations already, including what it claims was the first satellite transmission of 4K content to Latin America performed in Brazil back in May. The company has also announced that it will launch a permanent UHDTV channel on its European and North American footprint by September.

“Everybody is looking at these events as the breakthrough for UHDTV, but technology is still at its early stages, so there is still a way to walk before predicting the impact in terms of demand,” Sanchis says. “We expect ‘experimental’ live broadcasting of UHDTV during the FIFA World Cup 2014, but still without consumer reach. As for the 2016 Olympic Games, this is the event which should mark the real massive deployment of UHDTV across consumers, starting with DTH subscribers. We are confident that all the elements (advanced codecs, silicon, consumer Set-Top Boxes, etc.) will be in place in time to support this milestone.”

Martos believes these sporting events will act as a catalyst for UHDTV. “I think by the time we get to the Olympics, more aggregation of this type of content will take place. We have been participating in the development of a new standard – HEVC. This has been a major breakthrough,” she says.

The key, according to Sanchis, will be the rapid adoption of HD as result of these sporting events. “We expect 3-D to have a marginal impact, as this technology has not managed to succeed with consumers,” he says. “UHDTV will certainly require more bandwidth despite the improvements in compression technology, but the impact over the next few years will still be limited as UHDTV will remain a small part of the broadcasting market. HD will drive the demand and we expect that HD adoption will boom in Latin America in the near term, with an important contribution from the mentioned sporting events. This will have a very positive impact in satellite demand for video contribution and distribution segments, occasional use and DTH.”

After the Events
One of the major concerns is that while there is likely to be huge demand for satellite capacity at these events, what will happen once these events are over? Martos believes an over-supply situation will not develop as satellite companies that have been launching new satellites have sold their capacity fairly fast. González-Sanfeliu, is also confident in the region’s demand. “We have seen strong regional demand separate from demand for these live special events, and we expect that demand will continue independent of the World Cup, Olympics, or other sporting events,” she says.

Sanchis subscribes to the feeling, saying that while there will be a tail-off in terms of the demand for occasional use services, demand for satellite capacity will continue to grow for the foreseeable future. “Despite the fact that supply will also grow in the near term, we expect fill rates to remain healthy in the region,” he says. “We also expect to see some temporary capacity reallocation to Latin America during this period which could be later on refocused to other areas, therefore softening any potential over-supply effect.”

González-Sanfeliu adds, “We expect Brazil’s communications infrastructure will be prepared to cope with the demands of broadcasting these two events. Satellite remains a paramount factor for broadcasters as they finalize transmission services for their programming, especially when it comes to high-profile events.”